EMC has grown steadily in Utah over the last 5 years. Most of the physical facilities required to accommodate this growth have been acquired on a just-in-time basis. The current commercial real estate market in Utah is unique in that space is quite available in a variety of options (size, length of term, ownership model, etc.). Our first phase of the expansion started based out of an existing office in Pleasant Grove (PG). We were looking for a 10-year lease on ~30,000 sqft that would also have adjacent expansion capacity, but we were able to start hiring and training people immediately in PG.

We found the perfect place for our intermediate growth at 11747 Lone Peak Parkway in Draper. We moved into Suite 200 (33,000 sqft) at the end of 2011 and then expanded into Suite 300 about a year later. Last year we completed our occupancy of the entire building as we moved into Suite 100. This allowed us to begin our consolidation of smaller, higher cost locations in downtown Salt Lake City and Park City. As a bonus, we were able to recycle a lot of the furniture and equipment from those locations when we built out Suite 100 in Draper.

The leased facility in Draper hasn't been sufficient for our short-term growth and consolidation needs, however. We were fortunate to find a short-term lease on space in nearby Sandy while we looked for the right long-term option. It didn't take long for us to find and purchase a 12-acre parcel in the new Vista Station development in Draper. I am very excited about this location, mainly because it is adjacent to the UTA Frontrunner Draper station which is about as close to the mid-point of the Silicon Slopes as you can get. We'll be able to draw on the full population of Salt Lake County as well as Utah County with minimal commuting complexity. Our participation in and subsidy of UTA's EcoPass for our employees further sweetens the deal. We'll be neighbors with eBay, Thumbtack, Jet.com, SolarCity and other cool tech companies. Our first building with 100,000 sqft will be done this Summer.

Once the new Vista Station building is complete we'll be able to continue our consolidation of the various EMC offices in the area. Specifically, the PG and Sandy offices will close and we'll move everyone to one of the two Draper buildings (i.e., the leased facility on Lone Peak Parkway or the EMC-owned facility on Frontrunner Boulevard). Here are a few other details about the new building:

There are multiple parties involved in obtaining economic incentives from the State of Utah when a business is relocating or expanding, but the most important is the Governor's Office of Economic Development (GOED). As you would expect, economic incentives are usually only granted when there is a significant economic benefit to the state. The majority of the expected benefits fall into two categories:
The state typically grants incentives in the form of post-performance tax credits. In other words, the business has to perform by creating jobs and/or spending the money and then the state rebates back a portion of the taxes associated with those activities (e.g., payroll tax, sales tax).

When it comes to jobs, the average salary needs to be in excess of the average for the county in which they are located, to the tune of 10-25%. Since this is an average across all industries, it is fairly easy for a high-tech "Silicon Slopes" company to meet this requirement. For perspective, the most densely populated and highest cost location in the state is Salt Lake County and in 2014, the average salary was $47,652.

The incentives are usually granted for a period of 5-10 years, sometimes even longer, and the typical values are 20-25% of the estimated taxes to be paid, with a "not to exceed" cap. See GOED's new video for additional details. Interestingly, the state usually requires the city which most directly benefits from the economic development to also offer some type of incentive.

Another important party for economic incentives in Utah is the Economic Development Corporation of Utah (EDCUtah). They are a private, non-profit organization which partners closely with the state.

There are many examples of successful incentive awards in Utah. Following are a few recent ones:


The other category of party important in obtaining economic incentives is often a site selector. It was convenient for us to use ADP since they also manage our payroll and can easily access the data required for reporting when we claim our payroll tax incentives each year.

In summary, Utah is a business friendly state and their economic incentives program is just one of the reasons why.

Each January EMC brings together several hundred executives from around the globe for a strategy session in Boston. It has been one of my favorite meetings to attend over the last several years. We just concluded this year's session. While much of the content is not for public disclosure, my feelings and general impressions certainly are fair game. Allow me to share . . .

In summary, I am honored and truly excited to be a part of the EMC Federation at this point in time. I am grateful for the amazing people that are on the journey with me. I am humbled to be a leader helping to plan and execute on the great vision that we share . . . to enable the Digital Enterprise through business and IT transformations via Trusted Hybrid Cloud, Modern Application Development, Big Data and Cyber Security solutions.

Utah: Crossroads of the Internet 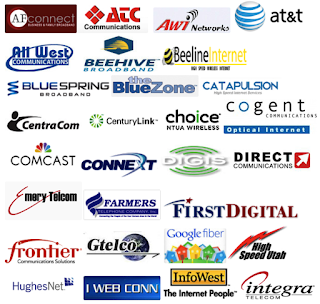 Much like the Golden Spike at Promontory Summit, which was the connection for the nation's rail network in the late 1800's, Utah remains a crossroads for critical infrastructure, like broadband networks. Utah's Department of Transportation (UDOT) gets props for laying thousands of miles of fiber underneath our roadways in close partnership with telecommunications companies. I-15 which runs from Salt Lake City south to St. George and then onto Las Vegas and Southern California is a huge broadband fiber corridor. Currently, 75% of the Utah corridor has fiber and conduit installed with the remaining 25% scheduled in the next 5 years. I-80 has fiber and conduit from Evanston to Salt Lake City. I-70 has the same from SR-6 to Grand Junction. Connecting these transportation and communication corridors to each other and across state borders will further enhance Utah's already robust and redundant high-speed broadband infrastructure, enabling smart economic development and smart roads. Utah is truly at the crossroads with transportation and broadband. I am glad UDOT figured this out early and is a leader ahead of the other states. 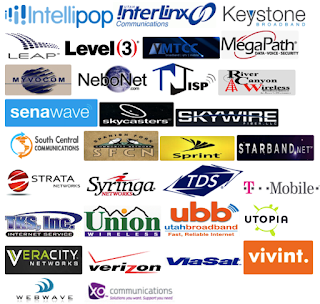 Significant kudos also go to the Utah Governor's Office of Economic Development (GOED) for creating the Broadband Outreach Center to help coordinate and communicate across the providers and users throughout the state, as well as the country.

One of the helpful tools they maintain is the Utah Economic Development Map. It allows you to view the services available in any part of the state, including but not limited to broadband. There are also cool and informative maps on UDOT's UPlan Map Center. All of this is part of Utah's comprehensive Broadband Plan.

The many service providers in the state are listed in the graphics to the right, but one of my favorite providers of both business and residential broadband is missing . . . Google Fiber! They provide excellent service in Provo and have announced imminent plans for Salt Lake City. I hope their arms-length stance with government and NIH attitude doesn't slow things down.

Below is a picture of some older communication technology and infrastructure in the state. It is cooler to look at than fiber optic conduit buried in cement.

Fodor's Travel recently named Utah as their top travel destination for 2016! They cite the following factors in their decision:
There are a lot of other great recreation & sight-seeing venues:

We also have great sports teams & venues:
In short, whether you've been to Utah before or not, one of your New Year's resolutions for 2016 should be to visit us in the Silicon Slopes.

Update: Days after I posted this The New York Times published their list of 52 Places to Go in 2016. Utah (Park City in particular) appears on the list at #12. No surprise.
No comments: