I appreciate working in a diverse workplace, but I appreciate it even more when it is inclusive at the same time. We're all like snowflakes . . . uniquely individual. And it is nice to watch the snow falling, especially when it is soft and fluffy Utah snow. The real power is when the snowflakes get together and move in the same general direction. Consider the power of an avalanche! Okay, maybe that's too scary for what I want to be a constructive analogy, but you get the picture. Diversity is great, but Diversity AND Inclusion together are powerful.

One of the ways in which we're diverse is the way we express who we are both physically and emotionally. Typical gender stereotypes would say those expressions look one way for men and another way for women. Like a snowflake, there are many ways in which I express myself as a man . . . and some of those might be considered to look more like the female stereotype. I'm fine with that since I'm simply trying to be the most authentic version of myself possible. 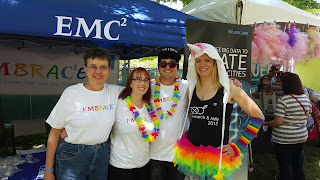 For some people their expressions cross the boundaries of our social traditions even more. Gender Transition is something I've been aware of for a long time, but only recently have I had more personal experience with it. I appreciate those who have taken the time to share their stories with me, most notably Grace Stevens. I also appreciate the LGBT employees at EMC who have been open and patient with me. It is fulfilling to work at a place like EMC where there is respect and support for people of every gender.