The announcement with Dell today is a huge milestone for me, EMC and the IT industry. It was 8 years ago this month that EMC acquired Mozy. It has been an amazing and eventful journey that continues on. Here are a few of my reflections on the experience of the acquisition and the following years. 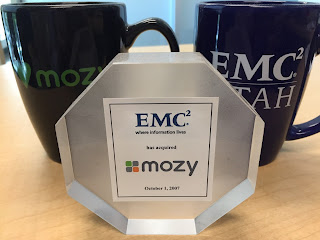 EMC's M&A strategy is quite different than what I've experienced at other companies, most notably Oracle. I'll never forget a conversation about our integration into EMC where we heard, . . .

"All I ask is that you take a look at what we have to offer. If there's something that helps, please take advantage of it. If not, keep doing what you need to do and let us know how it goes." - Joe Tucci, EMC Chairman

One instance where we gladly welcomed EMC's help was with our disk drive purchases. EMC helped drop our prices and improve our quality, almost overnight. One instance where EMC had nothing to offer was when we wanted to run a TV commercial to reach our consumer and small business customers. The corporate marketing team basically echoed Joe, . . . "Let us know how it goes!"

We did have more than one "close call" with the integration. I'll never forget reviewing a multi-million dollar proposal for IT integration. Moving forward would have crushed our delicate financial model. Not only did we get support to NOT move forward, I'm happy to say that the EMC IT integration approach of 2015 is much more agile than it was 8 years ago.

There are many Mozy people that I enjoyed working with, most of whom didn't leave until years after the acquisition. Josh Coates was the Founder & CEO of Mozy and had perhaps the most profound impact on me and the company as a whole. He is a smart, passionate entrepreneur. I am so glad we met in the Bay Area in 1999 when he was starting up Scale8 and I was working at Oracle. Other people I remember well from the very early days of Mozy include Pat Bozeman, Zach Wily, Cody Cutrer, Jon Jensen, Keith Tanaka, Dave Robinson, Paul Cannon, Tom Metge and Jared Wilks.

In addition to Joe Tucci, there were a bunch of other amazing people that welcomed me into EMC. This included Harsha Ramalingam, Andrew Homer, Tom Heiser, Chad Casamento, Jamie Prentice and Howard Elias. My associations have expanded to include literally hundreds of other EMC'ers, partners and customers that I consider to be close colleagues and friends. At the end of the day, it is the people that have kept me engaged and excited about my job.

So many things have changes since I joined EMC. The pace and magnitude of the change has been exhilarating, not exhausting. Here are just a few examples . . . When we were acquired our company name was actually Berkeley Data Systems. We legally changed it to Mozy after the acquisition. Then, after EMC acquired PI Corporation and I started working for Paul Maritz, we changed the legal name of our business unit to Decho. Things continued to change and we eventually changed back to Mozy. However, we weren't the same Mozy we had been before. We were working closely with VMware on exciting projects like Cloud Foundry and the predecessor to vCloud Air. Today's landmark announcement represents another exhilarating change which I willingly embrace.

In short, it has been an awesome journey for Mozy and for me personally. There are lots of other stories to tell, but I'll save those for another post. For now, I simply wish to say "Thanks" and "Happy Anniversary" to all of my Mozy friends!